I think this is a pretty rad idea. Have some hot local bands play a cheap ($5) show over the lunch hour at a chic downtown venue. Des Moines represent!

I haven't played in a band for a long while now, but I think that would generate a turnout on par with any 9 pm slot on a weeknight. In fact, I'd reckon you'd increase your chances of widening your audience because all kinds of people are downtown during the lunch hour. If you were to tell me that I'd have the chance to catch an even marginally good band instead of waiting in line at Bento Box for some over priced noodles, I'd be there in a heartbeat.

I think that during the week, it's just smart to have early shows to begin with. I probably think that because I'm getting bitter in my old age. So an honest-to-goodness good show over the lunch hour is  that much more appealing. With all of the possibilities in downtown Minneapolis and St. Paul, I'd be surprised if concert series like this don't catch on here as well.

It's also funny to see my pal Steven Virgil dressed as a legit lumberjack.

Parlours - Slowly From the Earth [Official Video] from Kate Jones on Vimeo.
Posted by Noah at 3:43 PM No comments:

That Awkward Moment is one of those devastating realistic trailers that taps into an untold walk of life so accurately, we can hardly conceive of life without it. The artistic is achievement is overshadowed only by it’s cultural impact.

The trailer tells the story of a handsome white guy who has a couple of roommates played by nerdy white guy and token black guy. Despite attracting the attention of a beautify, yet loose, blond babe, handsome white guy declares that if his token black friend - who has been recently dumped by his girlfriend for reasons unknown - was to be single, then all three roommates will remain single together in some sort of nonsensical bro-pact.

The most touching part of the trailer is when handsome white guy and nerdy white guy intervene in token black guy self-destructive habits by throwing his ice cream out the window. The two white friends suggest that instead of destroying his six-pack abs with empty calories, they all three go out and “drink like Keith Richards” at local watering hole.

Just when you think the trailer is over, the trailer attempts to convince the viewing audience that some sort of drama will take place. The real mystery is what the hell is happening in the second half in the trailer. Who are these people and why should we care? Maybe we need to watch the movie to find out, but we never will.

One Generic Podcast is underway! We're still building the website, which means that episodes could be a little out of date by the time they get posted.

We recorded episode 2 while watching the first half of the Super Bowl. As Mike put it, "I'm glad that the game sucked so we could keep talking about Phillip Seymour Hoffman."

We've only been using one microphone to record so far; an AKG c214. It sounds decent enough, but I think everyone speaking should have their own microphone. I said "everyone speaking" because ideally, we'll get friends to come chat with us most episodes to generate interest and to avoid the inevitable boredom that will come from listening to Mike and I talking to ourselves all the time.

I’ve also started sending out feelers to gauge interest in the possibility of expanding to other, more content specific podcasts. I think Sarah’s website could be developed into an awesome podcast.
Posted by Noah at 9:51 AM 1 comment:

In the Last Six Months

I haven't seen much of Adam since he put a cigarette out on my arm, but that's not because I hold anything against him. I'm happy that he's still doing music. I've always thought that he had one of the most amazing voices and it's also a lot more versatile than how he uses it. What's more is that he has the ability to willfully trim the fat so that even his most bombastic projects don't sound like something that has gotten out of control.

Adam and his Sleeveless wife have been zipping around the country for the past couple of years playing music and wooing hearts. Even having a baby only slowed them down a little bit because they had to change it's diapers. Assembling a proper band, they call themselves Eros and the Eschaton, but I'll probably call them Adam and Katey's band because I think I know how to pronounce that easier.

Their songs range from delicate nu-indie synth charms like You know I Do all the way up to face melting feedback anthems and even the wonderful pop haven that rents space somewhere in between.

I'm looking forward to their album that drops August 17.
Posted by Noah at 5:08 AM No comments:

Band Names I Just Came Up With

I may have been drinking:*


There are two main types of songs on Eric & Magill’s new album “Night Singers”. There’s the synthy dance anthem on one hand, and the melancholy acoustic anthem on the other. Despite this, and the fact that the album was written and recorded across continents and hemispheres, it’s impossible to say where the “Eric” ends and the “Magill” begins. 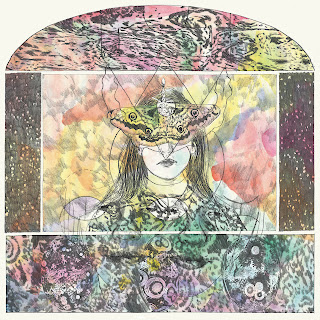 During the writing of “Night Singers”, Eric Osterman had move from the midwest to Brooklyn while Ryan Weber (Magill) and his wife Lussia were in Kenya volunteering working with the Peace Corps. The album reflects all of the emotional, physical, and interpersonal experiences involved with moving away from the familiar and into the new and the wild.

The album opens with infectious guitar jangle and a rhythm that challenges the listener to refrain from head bobbing and ass shaking. Ten seconds into the album and we’re already excited for the adventure that we’re about to take, pumping our fists into the air in victory for taking that first step; ready for all of the wonder and marvels to come.

Yet by the third track, Calendars, Eric & Magill are painfully aware of the passage of time - both fast and slow. It could be that they are prisoners of their own situation asking how much longer do we have to be here. Or, just as easily, they could see the approaching end they don’t want to come, unable to slow the spinning earth.

It would be easy to assume that access to minimal equipment, and recording and mastering in places like a pickup truck or a hallway, might have a degrading effect on the quality of the recording, but that is not the case with “Night Singers”.  Even the sparsely arranged songs like Peaks and Valleys or the title track, still sound full and robust.

Lussia Weber’s haunting vocal contributions serve to add texture and depth - not just sonically, but lyrically as well - to the album, rather than just being a backing voice on any given track.

“Night Singers” keeps the lush reverb and sing-along sugar of their first album, while fearlessly diving head first into new sonic territory. It’s a journey, it’s a roller coaster, it’s inspiring, and it’s heartbreaking. As the album closes it leaves us wanting more: not because it wasn’t satisfactory, but because it resonates so effectively that we want to savor that beautifully broken feeling of gratitude for just a little bit longer.

Listen to and download the album here.
Posted by Noah at 10:23 AM No comments: